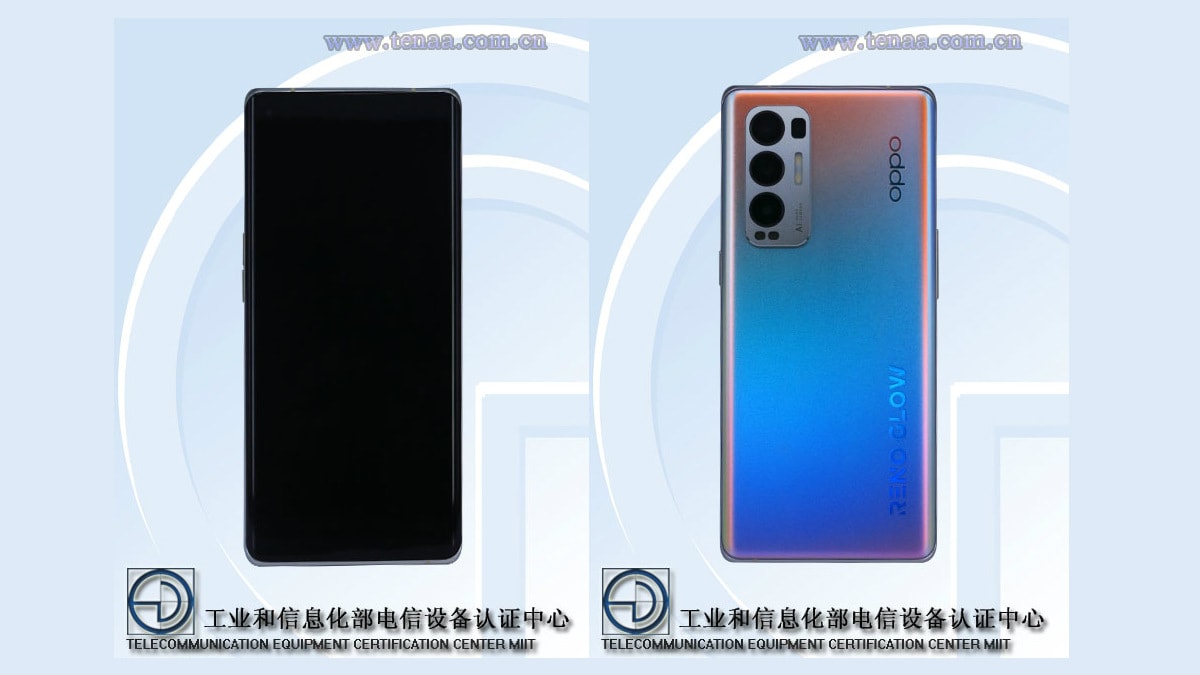 Oppo Reno 5 Pro+ smartphone has been allegedly spotted on TENAA and Geekbench, listings that suggest the phone will launch with the same specifications and design as rumoured earlier. The smartphone, which is expected to launch in China on December 24, could have a quad rear camera setup with a 16-megapixel primary camera. The phone is also expected to get a 6.55-inch AMOLED display. The Geekbench listing rates the phone with 886 points in the single-core test and 3036 points in the multi-core test.

According to the TENAA listing, an Oppo phone with model number PDRM00, believed to the rumoured Oppo Reno 5 Pro+ smartphone, is mentioned with a 6.55-inch AMOLED display with 2400×1080 pixels resolution. While it does not name the SoC that powers the phone, it does mention that the SoC is clocked at 2.8GHz. Since the Qualcomm Snapdragon 865 SoC has a core running at this speed, it is quite possible that the phone comes with Qualcomm’s recent flagship chip. A previous report had also claimed that the Oppo Reno 5 Pro+ smartphone will have a Qualcomm Snapdragon 865 SoC. The TENAA listing also mentions that the phone will come in 8GB/ 12GB of RAM and 128GB/ 256GB storage options.

It also suggests that the Oppo Reno 5 Pro+ could get a quad rear camera setup with a 16-megapixel primary camera and three secondary cameras of 5-megapixel, 13-megapixel, and 2-megapixel. For selfies and video chats, the listing mentions a 32-megapixel front camera. The battery capacity is listed as 2200mAh. Since the phone is likely to have a dual-cell battery, the total battery capacity is expected to be 4,400mAh. While there is no mention of fast charging, a previous report claimed that the Oppo Reno 5 Pro+ could get 65W fast charging tech.

Now coming to the Geekbench listing, a phone with the same model number, PDRM00, associated with Oppo Reno 5 Pro+, managed to score 886 points in the single-core test and 3036 points in the multi-core test. The listing shows that the phone sports 8GB of RAM and runs on Android 11. It also mentions that the phone has a ‘Kona’ SoC, which is believed to be the codename for Qualcomm Snapdragon 865.

The Oppo Reno 5 Pro+ will reportedly launch in China on December 24.

Which is the bestselling Vivo smartphone in India? Why has Vivo not been making premium phones? We interviewed Vivo’s director of brand strategy Nipun Marya to find out, and to talk about the company’s strategy in India going forward. We discussed this on Orbital, our weekly technology podcast, which you can subscribe to via Apple Podcasts or RSS, download the episode, or just hit the play button below.