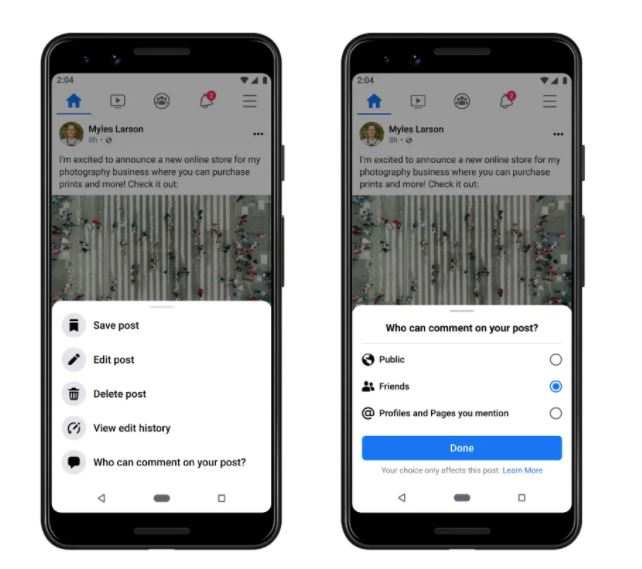 Facebook has rolled out a new tool to give users more control over what they share to News Feed by managing who can comment on their public posts.

As to why it’s ‘good news’? As this means that Facebook users can now control their commenting audience for a given public post by choosing from a menu of options ranging from anyone who can see the post to only the people and Pages you tag. By adjusting your commenting audience, users can further control how they want to invite conversation onto their public posts and limit potentially unwanted interactions. This means also means that public figures, creators or brands, can now choose to limit commenting audience on their public posts to help feel safe and engage in more meaningful conversations with their community.

Facebook is also making it easier to sort and browse News Feed, giving users more control over what they see. The company recently launched Favorites, a new tool where users can control and prioritize posts from the friends and Pages they care about most in News Feed. By selecting up to 30 friends and Pages to include in Favorites, their posts will appear higher in ranked News Feed and can also be viewed as a separate filter. Users who use Favorites frequently can access it from the Feed Filter Bar, a new menu at the top of News Feed.

“The Feed Filter Bar offers easier access to Most Recent too, making it simpler to switch between an algorithmically-ranked News Feed and a feed sorted chronologically with the newest posts first. Android app users can access the Feed Filter Bar when they scroll up on News Feed. The same functionality will be available in the iOS app in the coming weeks. Regardless of how often users use them, they can find Most Recent and Favorites in the Shortcuts menu,” added the company in the release.

“These are just the latest additions to our existing controls suite designed to help you control what you see in News Feed, including tools such as Snooze (where you can temporarily hide posts from a person, Page, or group) and the ability to turn off political ads,” said Facebook in a media release.

Adds more context to ‘Why am I seeing this’

Facebook is also providing more context around the content it suggest in News Feed by expanding ‘Why am I seeing this?’ This means that users will be able to tap on posts from the friends, Pages, and Groups they follow as well as some of the posts it suggests and get more context on why they’re appearing in users’ News Feed.

Related topics: If you’ve recently engaged with a certain topic on Facebook, Facebook may suggest other posts that are related to that topic.

Location: A user may see a suggested post based on where he/she is and what people near are interacting with on Facebook.

In case a user wants to update what he/she sees and how to share to their News Feed, check out News Feed preferences and privacy settings in the app and can adjust them.

Delhi HC to WhatApp users: Don’t use if unsure about privacy – Latest News...